Legally, police are supposed to shoot and explode sound bombs "above" people, and "aim" tear gas canisters not at people. Plastic, rubber and bean-bag bullets are not supposed to be aimed above the abdomen. However, that doesn't happen in the real world. These are unsafe 'crowd control' weapons used by cops intending to hurt people.  Sound grenades explode like a huge firecracker, emit a little teargas, and can injure or blind if near you. 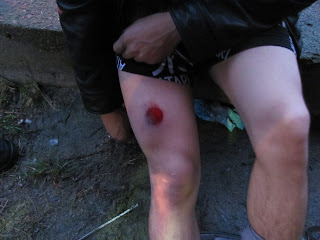 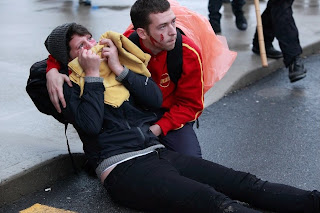 WHAT TO DO:
Actively avoid being a target.
If you can safely, look at the where the cops are aiming, and the direction of a incoming projectile to see if you or others nearby are in danger. Warn others "Incoming!", face away, and protect your eye and head with your arms. If you can, deflect or kick away incoming tear gas canisters. Remember, teargas canisters burn HOT, so heavy gloves or shoes must be worn to avoid burns.


A slow safer retreat:
If you are retreating as the police advance on you firing tear gas canisters that may hit you, work with your buddy in walking backwards. Buddy 1 walking backwards faces the police to spot, deflect or warn of incoming projectiles. Buddy 2 facing the direction of the retreat, holds onto Buddy 1's shoulder and guides them so they don't trip over other people.

Police shooting plastic or rubber bullets, or exploding pepper balls  are aimed at people, (even thought they are only supposed to be aimed at their legs).

The Surete Quebec aimed at and shot three students in the head in Victoriaville, May 2012, causing fractured skulls and facial bones, traumatic brain injuries, blindness, hearing loss and a shattered jaw. Then they delayed an ambulance as one student lay dying. Other students had hematomas on their legs and arms. Medics had to move these injured people several times while treating them, and persuade the police to let an ambulance through. Yes, the police violate their own protocols (not shoot at the upper body, and to immediately provide an ambulance for anyone hit). Later, they lied about what they did.

The injury from such a bullet is often internal and not visible. Bones may shatter, arteries and veins may rupture, muscles and organs can be damaged. Shock may set in later, or rapidly. People injured by a these munitions often need an advanced medical checkup to rule out or treat internal injuries.

Protection: Realistically, only a sturdy sports, military or motorcycle helmet with a shatterproof face shield can offer protection. Plastic bullets can shatter glass lens on a gas mask, swim goggles and easily penetrate a ski goggle.
It may be difficult to see the actual bullet trajectory, but you may be able to spot the police shooter and see where he is aiming.
Advise vulnerable people in the line of fire to face away from the police, and protect their heads and necks with folded cardboard signs, jackets, etc..

You can see and hear them in the video by Grappa below, and the  "Raw video"  video clip on the "Introduction" page.
This is becoming our latest concern, as Montreal police are indiscriminately shooting them into crowds. They can explode in people's faces, which obviously is very dangerous. As noted in the video on the introduction page, one student lost an eye due to the explosion. People can be injured by the explosion itself if nearby, and the flying metal fragments from the blasting mechanism can travel meters away.

Your best protection beside ear plugs, helmet and a strong face shield, is to turn away and cover your ears/eyes if you see an incoming grenade. Watch the video to get a good description of what a launched grenade tends to look like.


Video from Montreal about the police reliance on unsafe sound grenades

Information for protesters and medics on preparing for and staying safe in demonstrations. Info on police tactics and weapons and weather issues.